Chinese e-commerce giant alibaba said on July 23 that it will allow small U.S. businesses to sell their products on its website with immediate effect, defying fierce competition from amazon and other rivals.That means U.S. merchants will be able to sell to global buyers through alibaba's online platform. Robinson Fresh, a fruit and vegetable wholesaler, and Office Depot, an Office supplies company, are among the first us companies to join alibaba's platform.So alibaba is hoping to win business in the U.S. because its marketplace offers small and medium-sized businesses the ability to do business globally. Alibaba has stressed its interest in winning over manufacturers, wholesalers and distributors.According to the us B2B e-commerce report 2019 released by relevant materials, the us B2B e-commerce market (website and e-commerce platform) sales in the past year reached the fastest growth in history and exceeded $1 trillion for the first time. And, crucially, surveys show that for the first time, American firms are buying more electronically than they traditionally do.According to analysis of B2BecNews, B2B transactions conducted through online channels accounted for 50.7% of the total B2B sales in the United States in 2018, up from 49.2% in 2017, which means that more and more American merchants are willing to conduct B2B purchases through this channel. Given the pace of business-to-business growth in the us, the news is an irresistible temptation for any e-commerce platform -- and certainly for alibaba.However, in the international market, amazon is still a world leader in the Internet industry, its strength should not be underestimated. As early as September 2018, amazon said that its B2B e-commerce platform had 'annual sales of more than $10 billion'. Another Research firm, Forrester Research, said in a survey of amazon that the figure could exceed $20 billion this year. In the face of such a powerful opponent, alibaba in addition to open B2B trading platform, obviously in the future also needs greater efforts.Fortunately, ali also takes globalization seriously enough. This year will be the start of alibaba's 'local to global' strategy, said Trudy dai, President of alibaba's wholesale Marketing Department. In may, alibaba announced the opening of aliexpress platform to foreign merchants, and it has already opened the platform to small and medium-sized enterprises in Russia, Turkey, Italy and Spain to register and sell products on the platform. At that time, alibaba also promised that the platform would be open to most countries in the world in the future. Cross-border e-commerce is expected to reach $523bn by 2020, according to AliResearch.Previously, Tmall also revealed that it will achieve import coverage of more than 120 countries and regions within five years and expand the products from 4,000 categories to more than 8,000 categories. Although the open platform cooperation between ali and American merchants is only for B2B transactions at present, the steps of cooperation have been stepped out. I believe that consumers will have the opportunity to directly experience overseas online shopping shopping from American merchants without middlemen to earn the price difference in the future.In recent years, the pace of alibaba's international market has been accelerating. We believe that with the acceleration of globalization, alibaba will bring more diversified cross-border e-commerce services with more affordable prices to consumers in more countries. 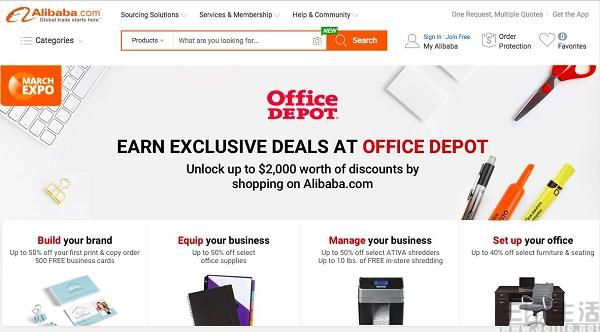